My cartoons have appeared in numerous print publications and online. My daily comic panel TOMVERSATION is published at this website and also online at Facebook and Instagram daily.

I have been drawing and cartooning ever since I could hold a crayon. I have a blog tied in with my daily comic panel which explains a lot of his process and build up to TOMVERSATION’S daily production.

One of my biggest cartooning influences is Charles Schulz, I love his simple style and way of story telling. Also most of Hanna Barbera, especially The Flintstones. One of the first characters I could draw was Fred Flintstones.

But not too long ago cartoonist Ralph Dunagin passed away, he did a comic strip called “Dunagin’s People,” and I noticed that a lot of his work reminds me of mine, so it seems that he was a big influence on my drawing style. As I looked at his work after so many years, I could see where I got a lot of my style – how I draw sleeves and clothing and even faces. I remember as a kid studying his art. I wouldn’t just read his comic, I would study it. It all came back to me after reading his obit and seeing his old work at the time of his death.

Over the years, Tom I drew for different publications and my work appeared in newspapers and magazines and other places, but life takes you in other directions and I ended up doing other things. For many years I owned a printing/marketing business and before that I ran a company that typeset and printed publications like school newspapers and books.

For 15 years, I was the editor and publisher of the Coconut Grove Grapevine, the daily news of Coconut Grove, Florida (a small sailing village in the heart of Miami).

Now I am concentrating on Tomversation full time.

Follow along at these social media sites for daily Tomversation comics! 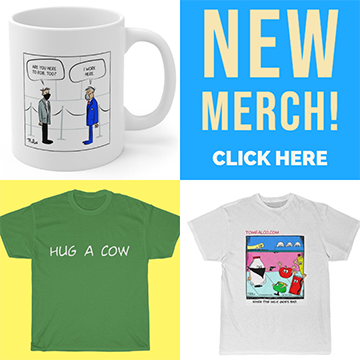